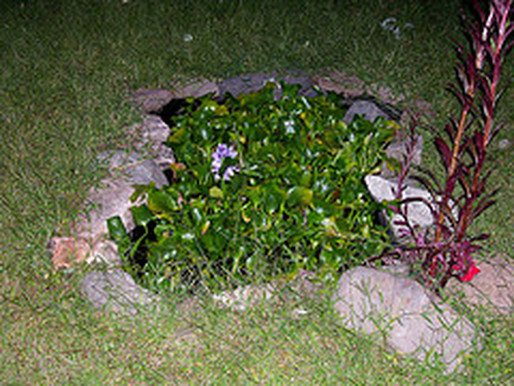 This is our outdoor pond/pen for all our turtles in the spring, summer, and early fall.  We ended up with some local frogs inhabiting the pond, but no tadpoles yet.  The turtles that we have kept together in the pen are our 2 south american woods and an ornate box male who is brought out to get exercise.  The pen is about 8x8x8 with 2x6 boards around the border with a small ditch along it to prevent escape.  The pond itself is in the center and measures 4x3 and is 4 feet deep at the center.  There are 4 goldfish, and at least 8 trapdoor snails residing in the pond at all times.  The plants in the pond were 1 water hyacinth...which quickly became at least 20 as seen in the photo.  The tall red plant is a beautiful victorian scarlet pond plant which grows a cluster of red flowers.  This is another project that will be greatly modified in years to come, but we need to upgrade our fence first, so it'll be a while.